Kampot province is famous for its salt fields. Kampot’s salt is of a more natural quality than salts produced in foreign countries, since no factories are used in its developmental process.

Over a thousand hectares of land in Kampot are used as salt fields, and you can find them on the road from Kampot to Kep. Salt production in Cambodia is limited to the dry season months. The pools are filled with ocean water and the water is allowed to evaporate leaving salt crystals. The process is repeated several times and the salt is then collected and delivered to a salt factory where it is cleaned and iodine is added.

Salt is an indispensable food product and important source of nutrition for humans. In Cambodia, salt production is highly depending on weather conditions. If the weather condition is good the yields are very favorable. In order to get the final salt product a stepwise production process is required that takes around 30 to 45 days including the addition of iodine substance before market distribution is possible. 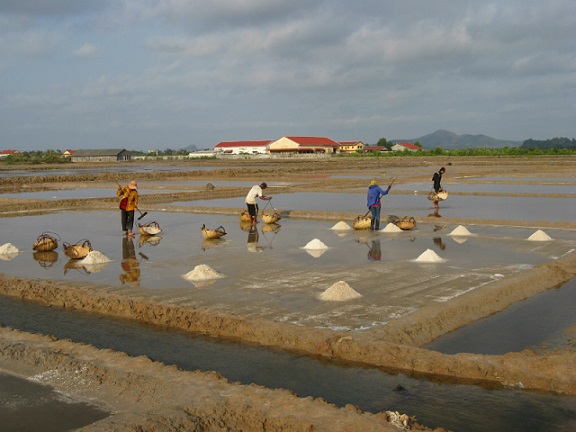 There is a saying “meal without salt is like cake without sugar”. Kampot is where salt is produced for local consumption and export. Although Kampot is known for production of iodized salt, there had been only limited success in producing it in large quantities. This was due to the scattered of many small to medium sized salt producers in Kampot and Kep provinces and the lack of infra structures, investment fund, and legislation requiring them to iodize all their salt. Before Pol Pot regime, only a few businessmen owned some 3,000 hectares of salt farming land. They hired workers to work in their farms. They market their product all over the country.

The salt fields are closed to the ocean, and water is let in from the ocean to the fields. The fields are then blocked from the ocean, and the water is allowed to evaporate, leaving salt crystals. This process is repeated many times. The raw salt is then collected and piled up in warehouses in the salt fields. Then, it's delivered to the salt factory, where it is cleaned, Iodine is added, and packaged in 50 Kilogram bags, for shipment throughout the country. All salt production is done without any machines - all manual work by humans, mostly women. 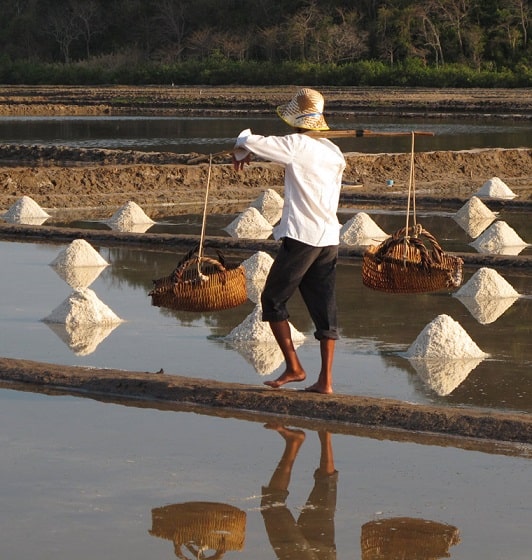