Barseat Temple
was built during the reign of King, Soriyak Varman I (1002-1050) and located on a hill at Ba Set village, Ta Pun commune in 15-kilometre (9 mi) distance from the provincial town. Ba Set temple adapts the architecture of 11th century and built in 1036 and 1042. Next to the temple, there is a pond having 20-metre (66 ft) length 12-metre (39 ft) width and 10-metre (33 ft) depth. The pond is never dried, though in the dry season. In rainy season, the water level is higher than usual.

Wat Ek Temple
adapts the architecture of 11th century and built in 1027 during the reign of King, Sorayak Varman I (1002-1050). It is located at Piem Ek commune in 14-kilometre (9 mi) from the provincial town.

Ba Nan Temple
adapts the architecture of mid 11th century and the end of 12th century the temple was first built by King, Ut Tak Yea Tit Tya Varman II (1050-1066) and was built finally built by the king, Jayavarman VII (1181-1220). The temple is located on the top of approximate 400-metre (1,310 ft) heighten mountain at Koh Tey 2 commune, Ba Nan District in 15-kilometre (9 mi) distance from the provincial town by the provincial Road No 155 parallel to Sang Ke River. At the mountain’s valley, there are Ku Teuk and two main natural well, namely: Bit Meas and Chhung or Chhung Achey.

Prasat Snung
characterizes as three separated stupas made of brick, located on a hill having 30-metre (98 ft) length and 20-metre (66 ft) width, in Snung pagoda’s area, Snung commune, Ba Nan District in 22-kilometre (14 mi) distance from the provincial town. According to the style at the gate, the temple is similar to other temples in 12th century. Behind the temple, there is another new constructing temple.

Phnom Sam Pov Resort
is the natural resort located along the National Road No 57 (the former National Road No10) at Sam Puoy commune (the high land having more than 100-metre (330 ft) height) in 12-kilometre (7 mi) distance from the provincial town of Battambang. On the top of Sam Puoy mountain, there are temple and three natural wells, namely Pkar Slar, Lo Khuon and Ak So Pheak. Next to Sam Puoy mountain, there are some main mountains, the natural site like Phnom Trung Moan, Phnom Trung Tea and Phnom Neang Rum Say Sork. These mountains related to the Cambodia folk legend of Reach Kol Neang Rum Say Sork.

Sek Sak Resort
is the natural resort, which has been popular since before the civil war time. Sek Sak stretches along the river bank full of plant, trees and bamboo-green nature in 500-metre (1,640 ft) length. As long as visiting Sek Sak, tourists can also visit other attractive sites like Po Pus Pich Chen Da Dong Tong and Sa Ang speak, the pre-history site in five kilometer (3.1 mi) to six kilometer (3.75 mi) distance from each other. Sek Sak located Treng commune, Rotanak Mondul District in 50-kilometre (31 mi) distance from the provincial town of Battambang along the National Road No 57, the former National Road No 10. 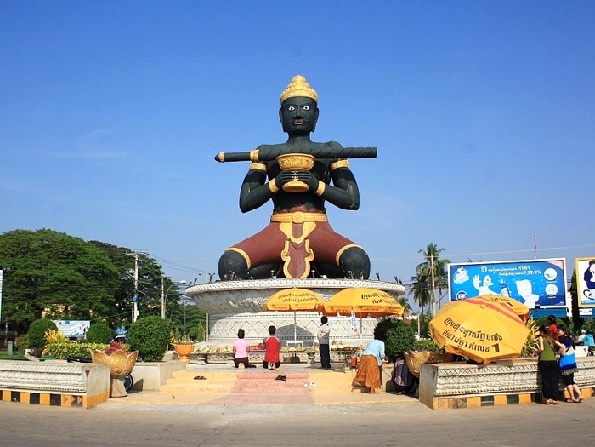