Another great cave closer to Kampot is in Phnom Kbal Romeas. It is easy to reach from Kampot on bicycle, following the national road 33 to Kep and having a left-turn where the road first time bends to the right.
The sign to Kbal Romeas cave was used as a shooting target.
It's actually a typical cave for these limestone mountains, and it was so far completely left in it's natural state till now. Means one has to bring a torch (best a headlight) and the climb leads over natural ground, rock and mud. The historical background of Kbal Romeas cave includes findings of ceramic shards who date back several thousand years into stone ages. The cave in which a shrine is placed is a huge stalactite cave, and one can climb deep inside. As always in these caves there are numerous bats living inside.
Their excrements produce a strong, typical smell. There are always some self-declared guides around the main entrance who show one the cave for money. A guide can be very helpful when going the first time deeper into the cave.
There are several entrances into what is actually a larger cave system. It is possible to cross the whole mountain through the cave and leaving it at the other side through a kind of natural chimney. Climbing deeper into the cave requires some skills. Some parts are quite narrow and deep, some parts are steep and a bit slippery. After a certain narrow passage the cave is opening into a grand stalactite hall with siderooms and a couple of clefts to continue.
There is partially a bit light from holes in the ceiling, but not much. It is crucial not to loose orientation in the cave and make absolutely sure to find the way back. Although it's very quiet inside the cave and apart from the bats there seem not to be many animals, in a sidecleft, a kind of a pocket, I saw a bigger snake resting. The snake didn't care for me; probably it slept.
Another peculiar animal I encountered was the spiderlike creature shown in the sidebar. Although no further equipment than a torch is required, I would say the difficulty level is middle. Having an accident in the cave can turn out miserable, particularly when one is inside alone and nobody outside knows about that.
Not many people penetrate the cave deeper. These limestone rocks and mountains are also water reservoirs with streams leading out of them. 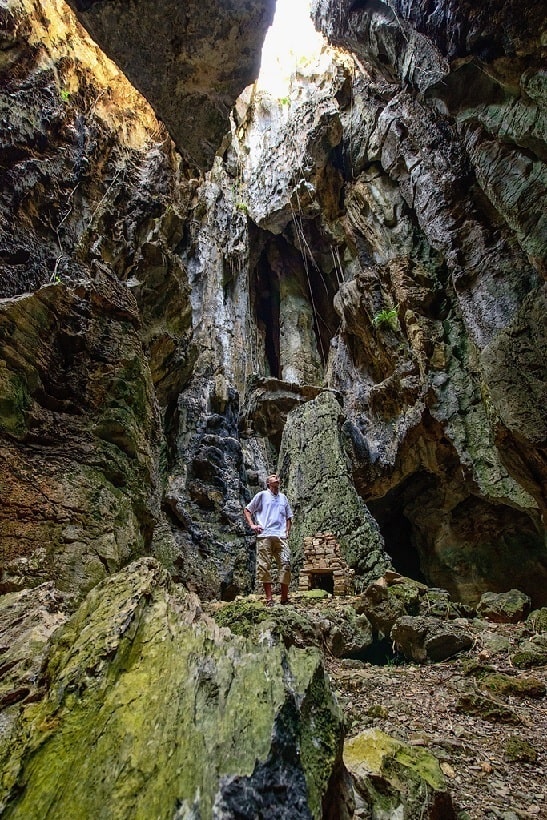