According to legend, a man named Ta Tai and his son went to the waterfall to fish because the waterfall was the joining point between fresh water and salt water. There was a storm and the resulting floods carried away Ta Tai's son.
Four or five days later, however, the boy was found at the same spot from where he disappeared. When Ta Tai questioned his son, the boy said: "There is someone who took me to a secret place, where he turned into a vampire and wanted to kill me. But suddenly Ta Eysei (a hermit) appeared to save me and took me back." After hearing the story, Ta Tai and his wife believed that their son was saved by Ta Eysei or Neak Sachang (another mane of hermit). Ever since then, the Waterfall has been called Ta Eysei Waterfall or Ta Tai Waterfall.

Although the waterfall flows all year, in the dry season it is possible to swim in the naturally formed pools at the bottom of the cascade and due to the low flow of water it is possible to walk accross the ledge. In the wet season the river flows in all its might and the waterfall is more spectacular with the enraged white foamed waters running over a fall 4 meters long.

The water of the river is very clear as the source originates in the Cardamom mountains where the human settlements are scarce. You can reach the waterfall by boat or by road, although if you take the boat, the whole trip to the waterfalls is very pleasant and you will see amazing scenery along the way. The trip from the Tatai bridge to the waterfall takes about an hour (by slow boat).
The breathtaking views of the waterfall and the surrounding forests offer a memorable experience. Because of its strategic location away from the hustle and bustle of the city, Koh Kong is a popular destination for most tourists in Cambodia. Many travelers use the waterfall as a picnic spot as well. 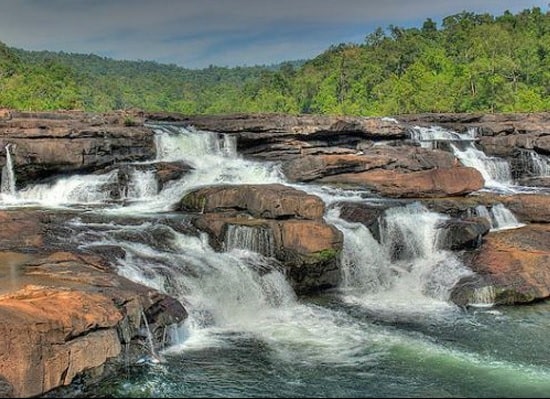