From there you follow a small road to the temple area. You can actuallyride all the way up by going past the stairway, beyond the house and tree area, where you will see a long out-building off on the right side. Follow the small road that runs along side of the building and stay on this winding road to the temple area. There are drink and food stands at the base of the stairway to re-hydrate after the trip. 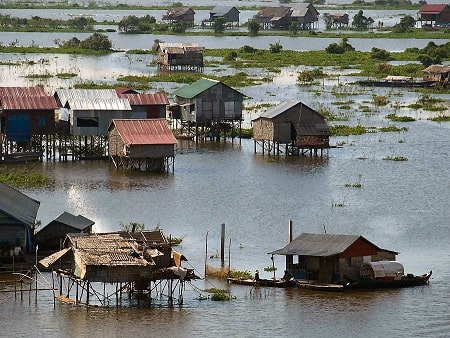 A view from Phnom Krom at the Tonlé Sap Lake

Phnom Krom is reached on the main road that runs south of Siem Reap. It is about 10km from the town. The path up the hill starts near the road, where your tuk tuk can park and wait for you to climb up. The climb takes about 15-25 minutes, depending on your speed. I would recommend that you combine the visit to Phnom Krom with the visit to Cheong Khneas.

If you are travelling on a packaged tour, then your itinerary is pretty much decided, and Phnom Krom might not be included. However, if you are travelling independently, then the best option is to hire a tuk tuk. Most tuk tuk should know how to go to Phnom Krom, as it is quite straightforward.