Low and steady marks the oxĺs character. Bona fide leaders, they are grounded, determined and highly dependable. They have the ability to motivate and inspire confidence in others as well. Those born under the sign are meticulous, systematic and real sticklers for details. They can be straight-laced and prefer routine, aiming to trash things out in a methodical manner till it bears fruit. Simplicity and straightforwardness govern their personality. However, the ox has a temper and itĺs wise to get out of its way when it rears it horns. It is also a signs that itĺs overly proud, refusing to seek assistance. The ox chooses to depend on its head to reason things and finds it hard to tolerate the week. Chauvinistic and even tyrannical, the ox is often grumpy, bigoted and refuses to forgive of forget for that matter.

There are five types of Ox, each with different characteristics:

Health: Strong and robust, people born in the year of the ox enjoy a fairly healthy condition with a long life span and less illness. Because of hard work with a stubborn personality, they often forget meals, which make them have intestinal problems. So enough rest and regular diet are needed for oxen to work efficiently. With a stubborn temperament, they find it easy to bear stress and tension, and they are reluctant to reveal themselves to others. Proper relaxation and regular short travels will benefit the ox.

Career: As the symbol of hard work, oxen always work hard at everything and stick to finishing it. Possessing a serious and responsible attitude toward work, they can come up with different approaches to their task. With a keen eye for details and an admirable work ethic, they are competent at such careers as agriculture, manufacturing, pharmacy, mechanics, engineering, draftsmanship, artist, soldier, farmer, politics, real estate, interior design, painting, carpentry, or quarry work.
They are intelligent logical thinkers. They approach work seriously and most likely to hold positions with authority. 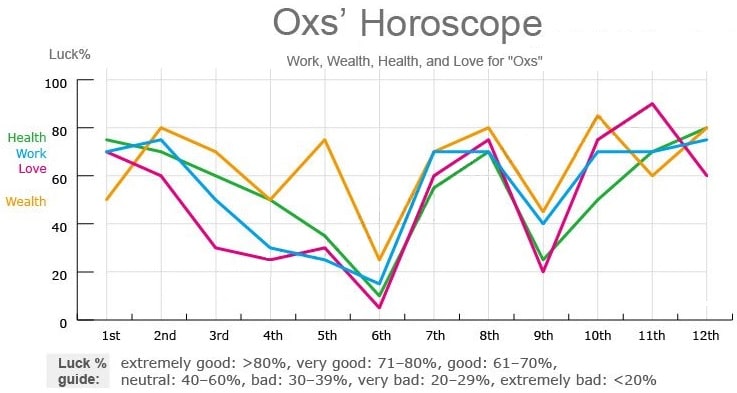 The Chinese zodiac signs are determined by the lunar year in which you were born. The Chinese believe the animal ruling one's birth year has a profound influence on personality, and destiny.
The saying is: "This animal hides in your heart."

The date of the Chinese New Year is determined by the Chinese calendar, a lunisolar calendar. The same calendar is used in countries that have adopted the Confucian and Buddhism tradition and in many cultures influenced by the Chinese. Chinese New Year starts on the first day of the new year containing a new moon (some sources even include New Year's Eve) and ends on the Lantern Festival fourteen days later. This occurs around the time of the full moon as each lunation is about 29.53 days in duration. In the Gregorian calendar, the Chinese New Year falls on different dates each year, on a date between January 21 and February 21.