The Mekong is a river that runs through China, Burma, Laos, Thailand, Cambodia and Vietnam. It is the world's 10th-longest river and the 7th-longest in Asia. Its estimated length is 4,909 km (3,050 mi). The Tibetan Plateau is the source of the Mekong River and finally pours into the south China Sea via the Mekong Delta.
The Mekong River, known as the Lancang in China, is the heart and soul of mainland Southeast Asia.

In Cambodia, the wet rice is the main crop and is grown on the flood plains of the Tonle Sap, Mekong and Bassac rivers. More than half of Cambodia remains covered with mixed evergreen and deciduous broadleaf forest, but forest cover has decreased from 73% in 1973 to 63% in 1993. Here, the river landscape is flat. Small changes in water level determine the direction of water movement, including the large-scale reversal of flow into and out of the Tonle Sap basin from the Mekong River.
Over 60 million people depend on the river and its tributaries for food, water, transport and many other aspects of their daily lives. 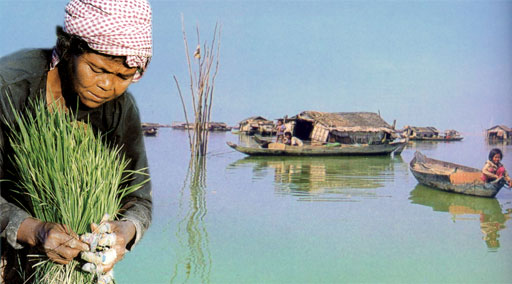 Thousands of tourists and foreign visitors touring Cambodia for all this beautiful Temples, Monuments, Pagodas, Beaches and so on, make a really enjoyable river Mekong cruise. What can be much more pleasant as cruising with a small ship on the calm water of the River Mekong maybe on a pleasant dinner cruise.
Before relaxing with a cocktail in the hand back in one of the beautiful newly built Cambodian hotels. Along the riverbanks of the Mekong some monks have their legs dangling in the water, some girls play badminton, at the restaurants just off the riverbanks candles are on and illuminate the grilled catch nicely decorated in the tourist.
On some huge stones on the banks of the river Mekong some couples are sitting hand in hand for a little dating, no blind date, that's not usual in Cambodia.

Cambodia's share of the River Mekong is rather small but extreme important. In Cambodia most of the lifestyle of the people - farmer- is centered around the water the river brings, no water almost no life.