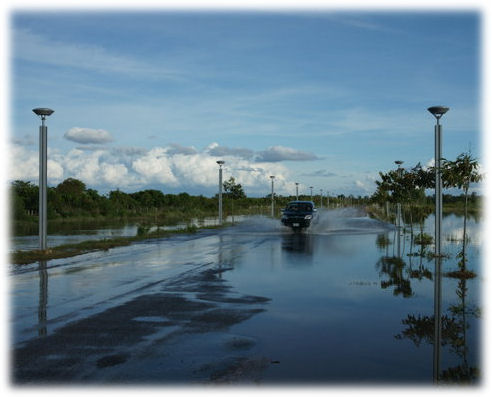 November-February: Cool and dry.
Average mid-day temperatures in the mid 20s, sometime dipping below 20 at night. The monsoon rains trail off through October and November, and have usually stopped completely by mid November. These months - November through February - are generally considered to be the best time of year to visit, with December and January offering the very best weather of the year across the country - comfortably warm days, clear skies, no rain, light breeze, cool evenings. Ideal beach weather in Sihanoukville. A comfortable time of year to visit the temples nearSiem Reap. Temperatures begin to creep up a bit through February and there are occasional, short 'mango showers' in the afternoon.

March-May: Hot and dry.
The dry season continues, the only precipitation being short 'mango showers' in the afternoons that slowly increase in frequency and intensity through these months. During these months river and lake levels are very low, generally making boat/river ferry travel much more difficult, less reliable and can greatly increase travels times dramatically. On the other hand, road travel (bus, taxi, motorcycle) is much easier and more reliable for lack of rainy season flooding. The temperature slowly rises through February and March, peaking out in April and May before the monsoons begin. February and March are still comfortable but by April mid-day temperatures can hover in the mid to upper 30s, especially in inland areas likeSiem Reap. It is less breezy at this time of year, the sun can be quite intense and the air becomes hazier with the rising humidity. Though sometimes quite hot, the lack of rain still leaves this a good time of year to visit the temples or the beach.

June-August: Hot and wet.
The hot season continues but is fairly quickly moderated as the monsoon rains begin in May and June, cooling, if only a bit, the hot, humid air. Across most of the country, the monsoon rains are fairly predictable, usually occurring in the afternoon or at night. And the afternoon rains usually last no more than a couple of hours making them fairly easy to plan around, especially if you are visiting the temples or touring. In fact, the Angkor temples are at their aesthetic best during the wet season. The surrounding moats and reflecting pools are full, the jungle is lush and moisture bring outs the colours of the moss and lichen covered stones of the temples. Boat travel becomes easier and more reliable as the season progresses and the river and lake levels rise, but some roads sometimes deteriorate or become temporarily flooded. The pattern of monsoon rains tends too be different along the coast and the beach towns, where the rains are more frequent and, when the season is at its peak, may last for days at a time, though, unlike the rest of the country, the rain on the coast may stop for days at a time as well.

September-Early November: Cool and wet.
The air doesn't really begin to cool much until October or November, but still, its cooler than the hottest months. In September the temperatures hover in the mid 30s and slowly drop through the following months. By October, the mid day temperatures are around 30. In September the rainy season is just passing its peak. The rains are still very regular and intense in September, but by October the frequency is usually dropping off considerably. By the end of October the rains are close to stopping completely, if they haven't already. As the rains end through October, the best time of year to visit Cambodia begins.

Many travellers try to avoid visiting Southeast Asia during the wet season, assuming that the rains will spoil the visit.
There are obvious disadvantages to visiting during the rainy season, but personally it is my favourite time of year in Cambodia. During the rainy season the temples of Angkor are at their most beautiful and most photogenic. The reflecting pools and moats are full, the vegetation is deep green and the wet stone of the temples is at its most colourful. Also of photographic note, the rain-washed air of the wet season is particularly clear as compared to the hazy, smoky skies of the dry season, making those long shots of the temples and rice paddies that much clearer. (If you always wanted that shot of from the top of Phnom Bakheng of the distant Angkor Wat in the jungle illuminated the light of sunset, this is the best time of year to bring your 400mm lens and give it a try.) Outside the cities, the rice paddies are full of water and green with new rice, the jungle is lush and the countryside is picturesque and alive with growing season activity. The river and lake levels are high making boat travel easy. (It's the best time of year to take the boat from Siem Reap to Battambang, reputedly one of the most picturesque boat trips in Cambodia.) And it must be said that there are fewer tourists in the country. The temples are less crowded, prices are lower and the bars and restaurants are all happy to see you. And, practically speaking, it does not rain all of the time or even every day during the rainy season. When it does rain it usually starts around 2:00PM or 3:00PM and lasts a couple of hours, making it easy to plan around in most cases. Toward the beginning and the end of the season the rains occur with far less frequency.